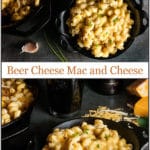 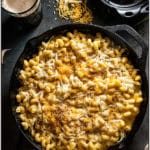 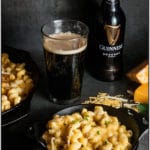 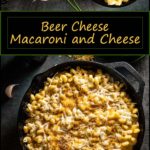 Made with a rich Guinness cheese sauce, beer mac and cheese is the most decadent macaroni and cheese recipe ever. Cheesy, creamy, deliciousness, you will absolutely love this easy adult mac and cheese. Perfect for dinner any night of the year or as a St. Patrick’s Day meal. I know I say this a lot, but this beer cheese mac and cheese might just be the best thing I’ve eaten lately. And yes, I felt the exact same way about this French onion chicken and still do. This is the best quick, cheesy carb fix I’ve had lately.

I mean, helloooo. Beer cheese. We’ve made this beer cheese at least 3 times since we made it for our Philly cheesesteak sliders. My husband once even made me a breakfast hash with scrambled eggs, peppers, onions, and potatoes and covered the whole mess in beer cheese. This beer cheese is literally the best thing I’ve ever eaten. The ingredients list for this macaroni and cheese recipe is pretty short and basic. You won’t find any milk or cream as the base of the sauce is beer.

How to Make Beer Mac and Cheese This beer cheese mac and cheese is very quick and easy to make. Start by boiling water in a pasta pot and cook the noodles according to directions on box. In a large cast iron skillet, heat the  olive oil over medium heat. Add garlic to the pan and cook until it is fragrant. Then pour the beer into the pan and let it cook down for 2-3 minutes. Keep stirring while it cooks so the garlic doesn’t burn. Slowly add in all the cheese. Let the cheese melt completely and stir to mix it before you add more. Drain the pasta and add the noodles to pan, mixing in as added. Then sprinkle some additional cheddar and parm cheese on top of noodles. Add a dusting of bread crumbs if you’d like. Then set oven to broil and broil for approximately 1 minute or until it is starting to crisp up.

Do I need to use Guinness in this beer cheese mac and cheese? The base of this beer cheese: Guinness

Nope! You can use any beer you like. I used Guinness in this for 2 reasons. I was trying to doing something for St. Patrick’s Day and also I wanted the heavier bodied beer as a background for this in the cold weather. That said, you can absolutely make this with any beer you have on hand including lighter beers instead of heavier lagers like I do for this beer cheese queso. If you want more tips on beer cheese, check out this post on how to make basic beer cheese.

Tips and Tricks for Making Beer Mac and Cheese This skillet mac and cheese recipe is incredibly easy to make. However here are some pointers to make sure it turns out perfectly each time.

Then you cook up the pasta, add it to the pan with the beer cheese and then top it with more cheese. Yep more cheese. Because cheese. Perfect thing to eat this weekend.

Looking for other cheesy recipes? Try these:

Easy beer cheese macaroni and cheese makes a delicious meal or side dish.

For the beer cheese

* We used Guinness this time but have made beer cheese with other beers as well. Use whatever you like.

[…] don’t do much to celebrate the day in our house other than make some pretty amazing grown up macaroni and cheese and chocolate frosted cake, I thought adding a little Irish themed fun to her math lessons this […]

[…] I lie. It’s my favorite homemade mac that isn’t this beer cheese mac and cheese. That recipe is to do for too, but this one is totally different. I promise it’s super […]

[…] cheese stuffed burgers are amazing. And beer cheese? OMG obsessed. It has been on everything. Mac n cheese, Philly Cheesesteak Sliders and beer cheese queso. It’s so dippy and […]

Can't wait to try this recipe. My entire family loves macaroni and cheese.