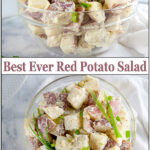 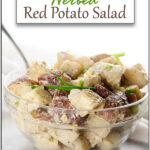 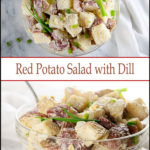 This red potato salad with dill and dijon is classic take on potato salad that’s full of flavor and better than any deli potato salad. A perfect addition to any summer meal or picnic. 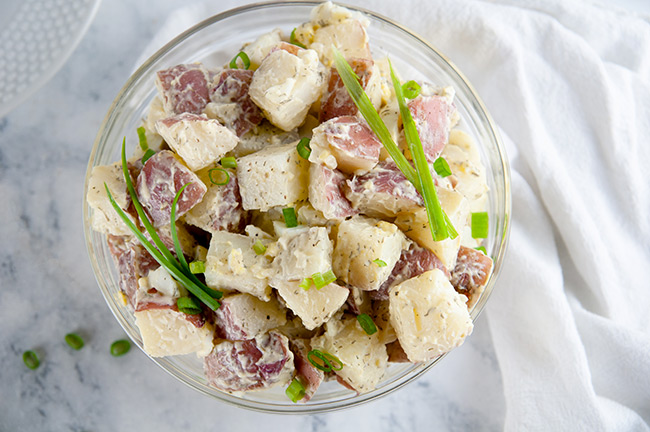 I don’t make tons of potato salad but every now and then the urge hits. The urge for GOOD potato salad not the lighter but still delicious roast sweet potato salad I make more often. Not the stuff that you buy in bulk in the deli section of the grocery store that’s a weird shade of yellow.

Nope. I want something that feels fresher.

Like this. There’s not a lot to it, but the few ingredients go into it pack a big punch.

What do I need to make fresh potato salad? 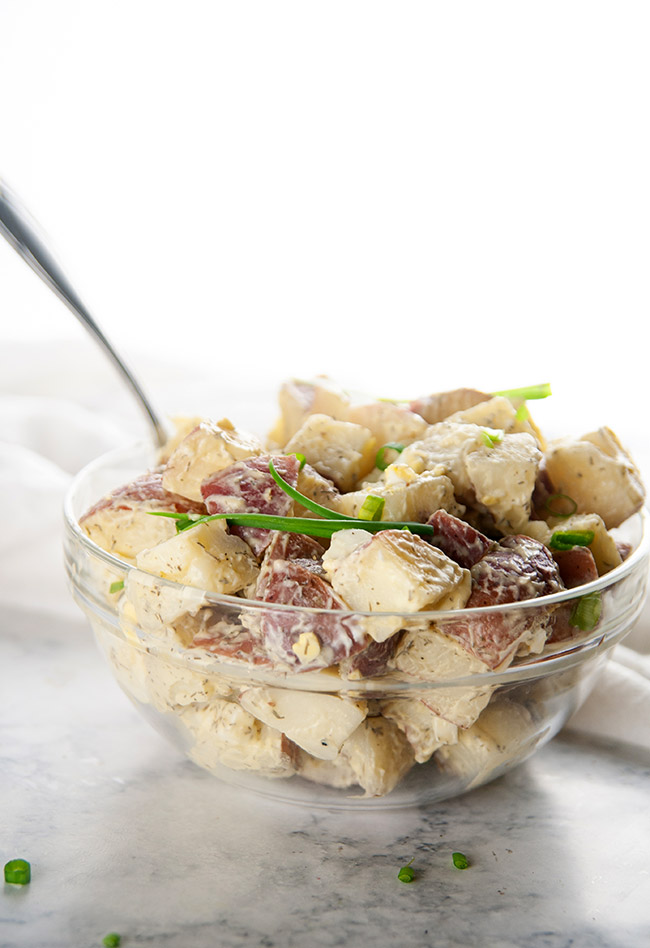 Really not much. Some spuds and a few other ingredients. I like to add:

That’s it other than some salt and pepper! You could add bacon in if you want. It would absolutely go well in this potato salad recipe. You could add in celery too if you’d like, but I’m not a huge fan of celery in potato salad so I leave it out.

While you can add in some extras to this classic potato salad recipe, I wouldn’t omit any of the ingredients. Each ingredient really adds to the flavor of this potato salad. The mayo makes for a creamy dressing while the hard boiled eggs, particularly the yolks, add richness. A hint of dijon adds just a touch of sharpness and the scallions bring a little mellow onion flavor to the mix. The dill? Freshness.

What kind of potatoes should I use?

Everyone has different opinions on potatoes. I’ll be honest. I’ve never met a spud I didn’t like. I adore potatoes so I would eat this salad with almost any potato variety. I do particularly like using red potatoes. They are waxier so they won’t fall apart when you cook them the way Russet potatoes would. You could also use fingerling potatoes or new potatoes. Both of those varieties also aren’t very starchy so they’ll stay together better when you cook them.

Making potato salad is really easy. The most time consuming part of the recipe aren’t difficult at all.

To make the potato salad, start by cutting the potatoes into roughly one inch cubes. Then boil them until they are fork tender but still firm. I also throw the eggs into the pot with the potatoes to save on dirtying an extra pot. 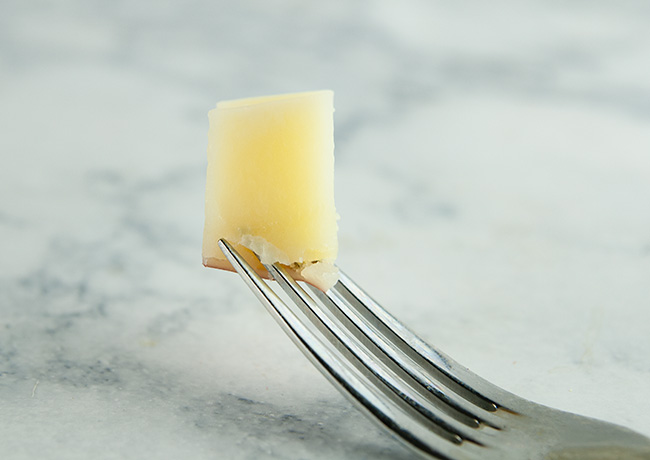 Once the potatoes and eggs are done, drain the water immediately. I pull the eggs out and then I return the potatoes back to the pot. Then I pop the potatoes back on low heat for a minute or two to cook out any of the extra moisture. That way you won’t have soggy potato salad.

Then I let the potatoes and eggs cool completely. Then I sprinkle the potatoes themselves with salt and pepper, before I add the mayo, dijon, chopped hard boiled egg and herbs to them. Last thing, I mix it up and pop it in the fridge. This is one of those recipes that tastes better if you let it sit in the fridge prior to serving so the flavors all can come together. I like to let it sit for an hour or so but you could let it sit for longer. 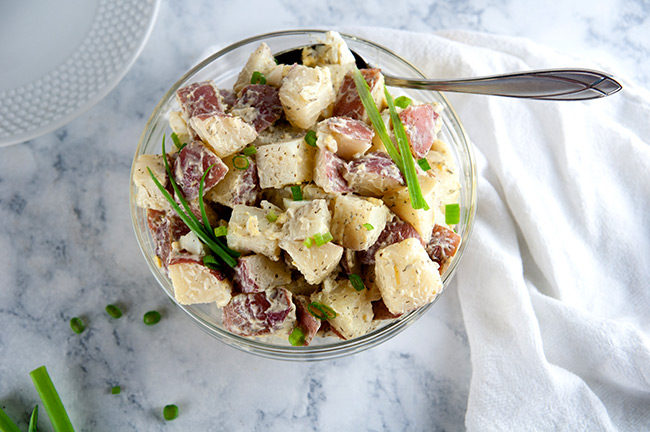 Summer barbecues and picnics practically beg for potato salad. You could serve it with any classic barbecue or picnic food like these jalapeno popper stuffed burgers or these bacon cheese stuffed bacon burgers.

It would also pair well with:

To round out the barbecue, I’d serve up some baked beans, easy baked corn on the cob and homemade iced tea. Then it would be barbecue heaven!

A classic take on potato salad full of flavor from lots of fresh dill and a hint of dijon mustard. A perfect addition to any summer meal or picnic.

Cut the potatoes into 1 inch pieces. Add them to a large pot filled with water. Add eggs. Bring the pot to a boil and let boil for about 5 minutes or until the potatoes are fork tender. Drain water and remove eggs. Let the potatoes and eggs cool. Then sprinkle the potatoes with salt and pepper, tossing gently to coat evenly. Peel and chop the eggs and add the hard boiled eggs to the potatoes. Stir in the mayo, dijon, dill, and scallions. Keep stirring until the seasonings and mayo and dijon are well combined. Refrigerate for an hour prior to serving to let flavors develop. Serve cold and enjoy!

[…] but in the summer so was this Italian cucumber tomato salad. For us, it was more of a staple than red potato salad with dill. It surfaced at every single event ever. Breakfast? Tomato cucumber salad. Fourth of July? Tomato […]

Dijon & dill are a great combo! I prefer red potatoes for potato salad, too, although Yukon Golds are a close second for me.

I love potatoes and dill so this sounds right up my alley!

I love the flavor of dill though I don't use it often eough. I would surely enjoy this.

It's a nice change isn't it?