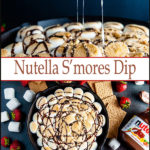 An easy take on s’mores, this two ingredient dessert is the perfect end to any summer gathering. Quick to make and super delicious, Skillet Nutella s’mores dip will be an instant favorite. 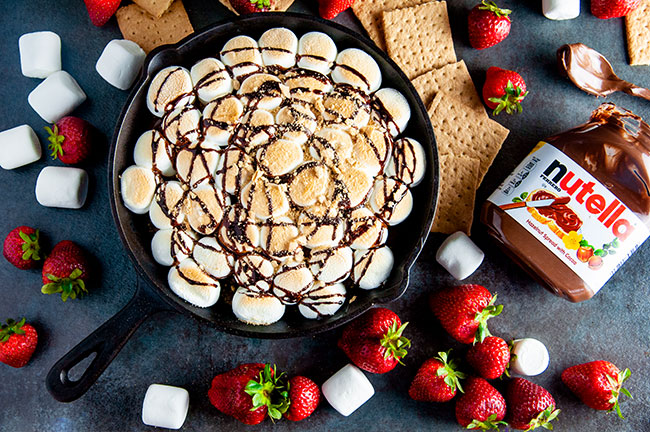 Who doesn’t love s’mores? In our house, s’mores are the taste of the summer. We are obsessed. Because, seriously, gooey melted chocolate and sticky, sweet marshmallows is the dessert of champions. 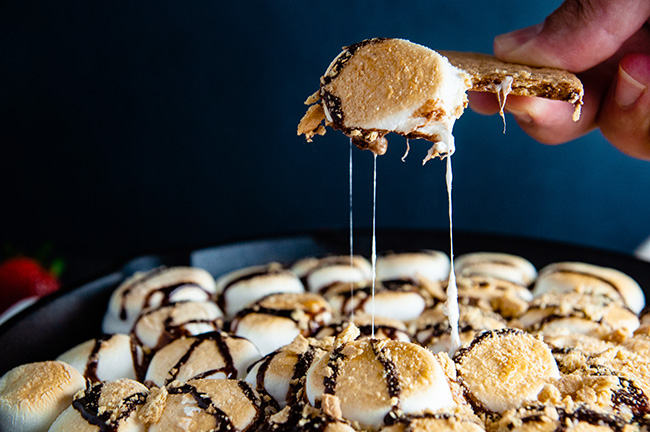 Of course, traditional s’mores are fantastic but they involve a campfire and sitting outside. We do a ton of that this time of year, but they aren’t great for when you are entertaining and everyone is inside. They also don’t work in the rain and we’ve had a ton of rain here lately. 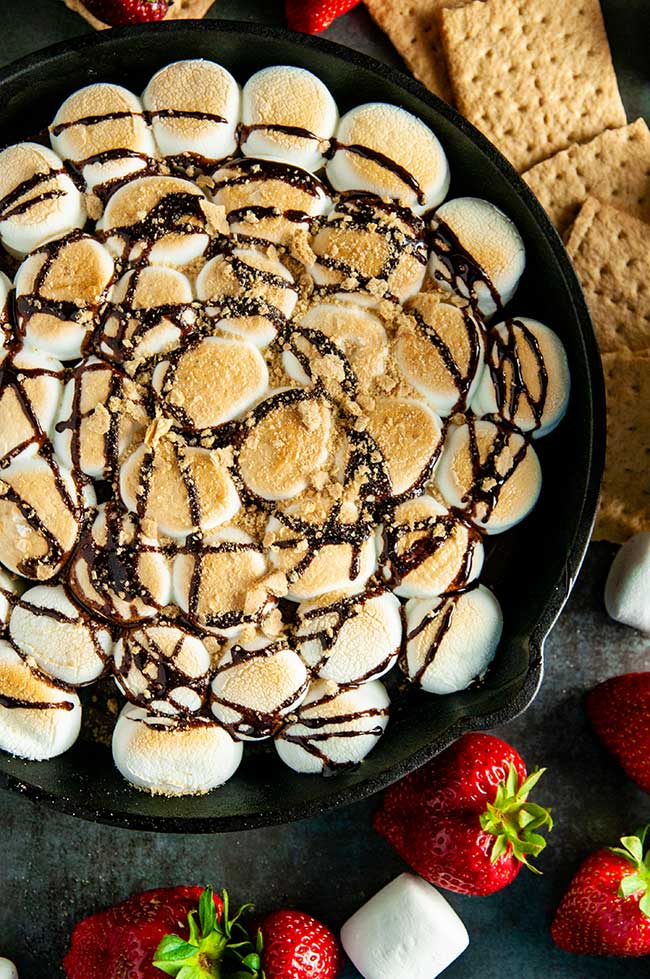 So that’s where these skillet s’mores dips come in handy. When it’s pouring, when it’s too hot outside to make a fire for marshmallow roasting, or when you need a quick entertaining dessert.

These Nutella s’mores bailed me out of not having a dessert on hand when I had my in laws over for dinner a few weekends ago. I had made this balsamic tomato pasta and a salad, but had forgotten completely about dessert. Ruh-roh.

My husband jumped in with the s’mores dip suggestion and dessert was served in less than 10 minutes from start to finish.

The easiest dessert recipe ever 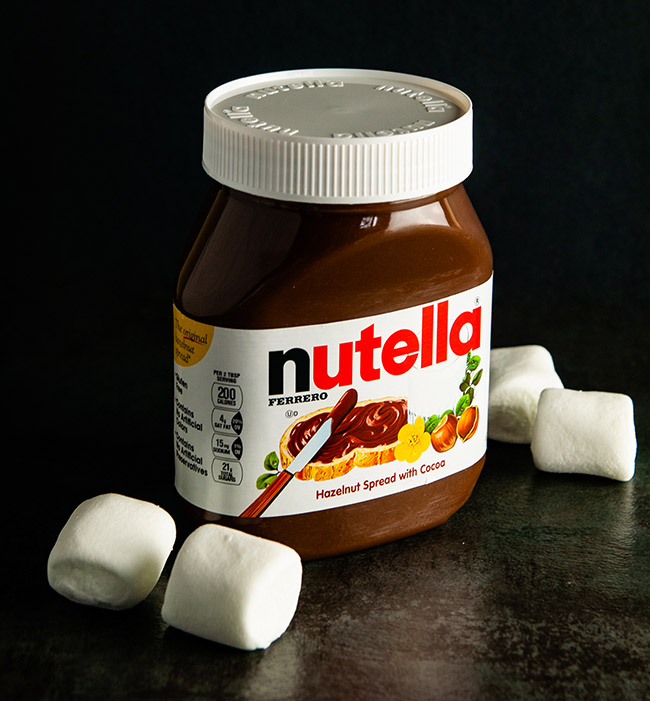 Nutella is the star of this show

This recipe is shamefully easy. You need only two ingredients to make the actual dip: Nutella and marshmallows. That’s it. 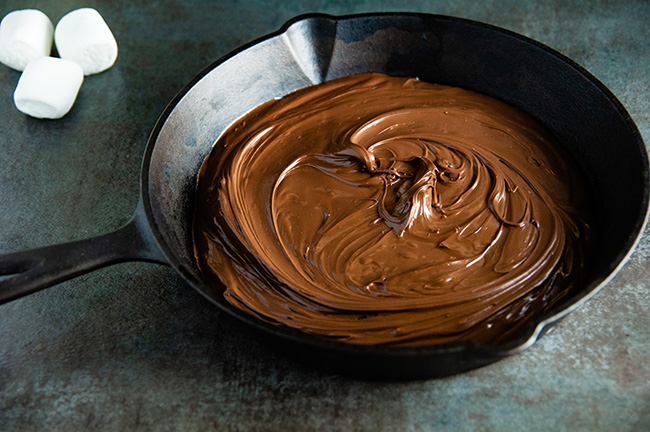 To make the dip, unlike my red, white, and blue s’mores dip, you don’t need to preheat the cast iron pan or melt anything first. You just spoon the Nutella into the skillet- no measuring cup needed if you buy the right size of Nutella. Then cover the top of the Nutella with marshmallows and pop it into a very hot oven for a minute or two. You’ll know its done because the marshmallows will puff up and get beautifully golden.

I don’t have a cast iron skillet. Can I still make this? 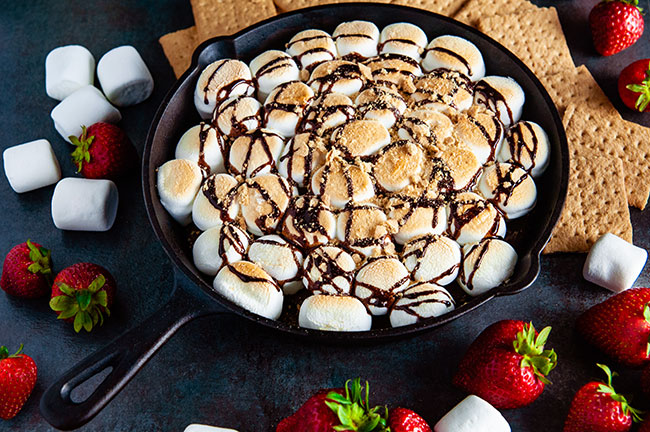 Yes! I make this in a 10 ” cast iron skillet because cast iron holds heat longer than a baking dish. The residual heat helps keep the Nutella super melty and dippable. But, because Nutella is easy to dip things into anyway due its texture, if you wanted to make this in other bakeware you could substitute at 10″ round pie pan though you may have to reduce the amount of Nutella a bit or an 8×8 square baking dish.

What to serve with Nutella S’mores Dip 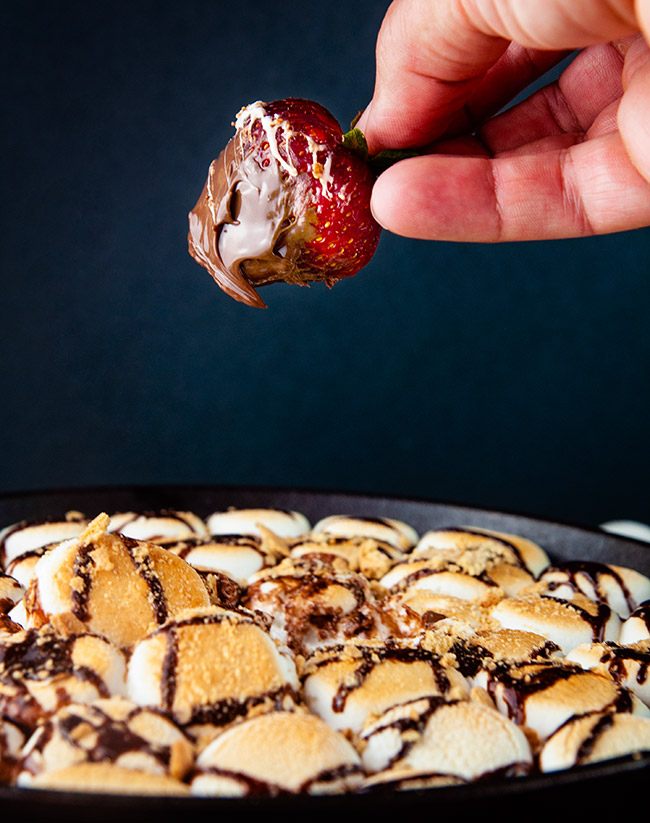 This Nutella s’mores dip almost reminds me of a chocolate fondue. You can use any dippers you’d use with chocolate fondue. My two favorites for this particular dip are graham crackers and strawberries. Other good dipper ideas:

Really the sky’s the limit on your dessert dipping choices! Whatever you choose to dunk into this skillet full of melty chocolate and gooey marshmallows, you know it will be delicious!

An easy take on s’mores, this two ingredient dessert is the perfect end to any summer gathering. Quick to make and super delicious, Skillet Nutella s’mores dip will be an instant favorite.

Preheat the oven to 450. Scoop all the Nutella out of a 26.5 ounce jar and spread it evenly over a 10″ cast iron skillet. Top with marshmallows. Bake in the 450 degree oven for about 2 minutes or until marshmallows are golden. If desired, sprinkled on graham cracker crumbs or drizzle on chocolate syrup. Serve with graham crackers and strawberries for dipping.

Pyrex SYNCHKG089152 Get Dinner Away Large Handle 8″ x 8″ Square Dish. Making it Easy to Monitor Casserole Cooking and Brownie Baking from a, 4, Red 8″

Oh wow.. that looks fantastic!!!! What a great idea for kids. I'm throwing a kids party next weekend and this is perfect treat to make. Thanks!