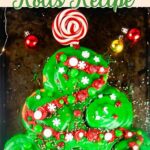 Learn how to make the cutest easy cinnamon roll Christmas tree for to put on your breakfast menu Christmas morning or any holiday occasion. No need to make homemade cinnamon buns to delight your kids with an easy, special breakfast that lets you enjoy the magic of the day without stressing over another big meal.

Post may contain affiliate links. As a member of the Amazon affiliate program, I may earn a small commision from qualifying purchases. To read my affiliate policy, click here.

If you have little kids, Christmas morning is one of the absolutely busiest, craziest, but most magical mornings of the year.

While they are certainly distracted by the presents (OMG SANTA!!!), kids need to eat.

But, you, my fellow tired parent warrior, do not have to break a sweat making homemade cinnamon buns or waffles for a special Christmas morning breakfast.

If your morning looks like mine, it involves way more coffee than average and a desire to snooze after being up late building toys and wrapping gifts and making *MaGiC*

So, I skip the hard stuff and do easy things that get big results.

It’s super easy thanks to storebought slice and bake cinnamon rolls and canned frosting, but let me just tell you, kids think it is the best thing ever.

In terms of supplies and tools, you don’t need much, but these make it easier:

How to Make an Easy Cinnamon Roll Christmas Tree

1. Open the cinnamon rolls and arrange them on a baking sheet.

Using 7 cinnamon rolls, arrange them on a baking sheet lined with foil.

To make the Christmas tree shape, use one roll at the top of the tray.

Directly below that top roll, put two rolls so that the top roll is in the center.

Make the next row a row of three rolls so that the other two rolls are centered and you get a triangle shape for the tree.

Finish the tree shape by placing the remaining roll in the center of the bottom row to form the stem.

2. Bake the rolls according to the directions on the package.

Once the rolls are arranged into the tree shape, bake them according to the directions on the package.

Keep in mind the rolls may need a little extra time because they are all pushed together and touching.

Remove them from the oven when they are golden.

You want the rolls to cool before you decorate them so they aren’t too hot to touch. You can either let them cool right on the tray or carefully transfer them to a cooling rack.

Remove the top of the icing can and the foil layer.

Microwave it for 30 seconds so it melts and gets liquidy.

Stir in a few drops of green food coloring until it makes a green color you like for the tree.

2. Pour the icing over the cinnamon rolls.

Make sure to evenly cover the rolls, but leave the bottom roll bare so it looks like a tree trunk.

Go to town or unleash the kids and let them go to town.

We used red decorator icing for garland, Christmas sprinkles, M&M’s and a peppermint lollipop for a tree topper.

Not into cinnamon rolls but still want something festive and easy to feed the family Christmas morning? Try these ideas:

And check out my Homemade Christmas Tree Chocolate Candy if you want another Christmas tree themed food!

Did you make this? Let me know!

Did you make this Cinnamon Roll Christmas Tree or any other recipe on my site? Leave me a comment below and let me know how you liked it. And make sure you follow along with me on Facebook, Pinterest and Instagram to see everything we’ve got going on.

Cook the extra cinnamon roll on a separate sheet.

Did you make this recipe?