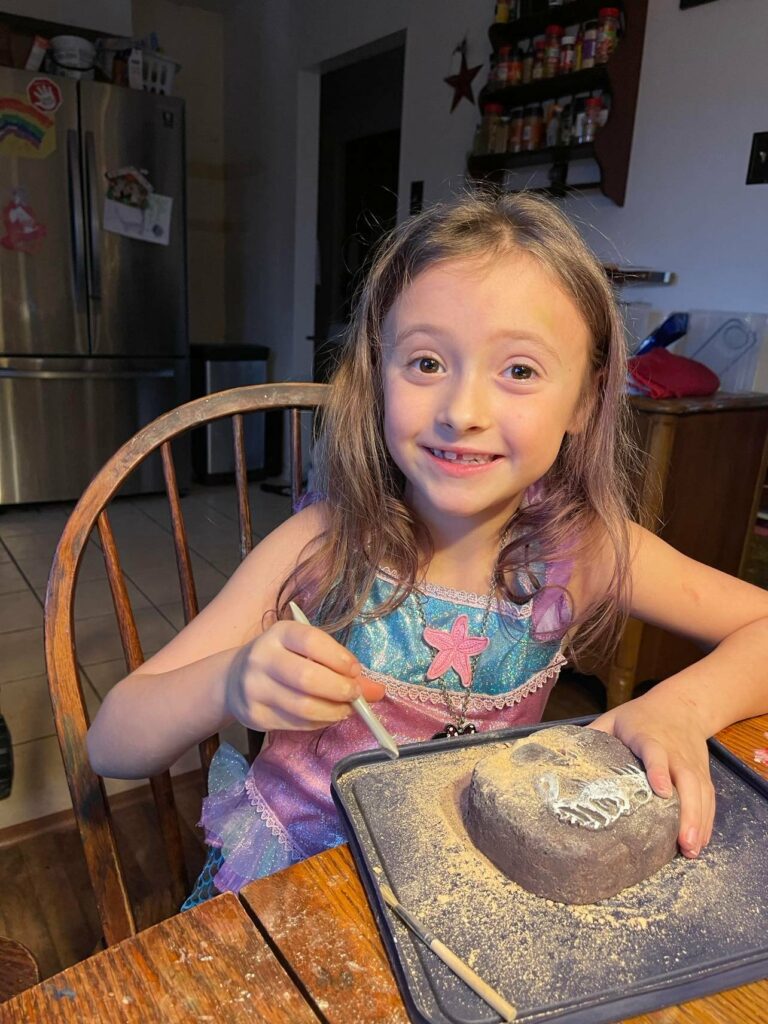 Dressed like a mermaid while digging for T Rex teeth. Dress for the job you want right?

I broke out of my rabbit hole this week to embark on the shopping mission to end all shopping missions with my sister for her wedding dress. She’s getting married at the end of the year. I’m happy to report that the mission was a success and am so excited for what a lovely bride she’ll be.

My daughter and I spent the afternoon digging for a dinosaur tooth in this National Geographic kit.

She’s pretty convinced she is in Jurassic Park and who am I to dash her dreams?

And with my older son, we’ve been doing tons of indoor water activities.

I’ve been spreading a tarp out on my kitchen floor and giving him tupperware containers full of water to play with along with measuring cups, bath toys, a toy fishing pole, etc.

If you decide to try this, word of warning it is messy but it does keep a very busy, curious 3 year old boy entertained for 30-45 minutes at a time, which is totally worth it to me.

And if you decide to switch it up even more with the water play- making soap bubble foam is also fun and kept him entertained for awhile.

We don’t talk about what we’re watching no no no.

I mean….er…. we’ve been watching Encanto on repeat. And listening to the soundtrack.

Lin Manuel Miranda is a treasure. Someone is checking on him to make sure he’s ok, right? After Betty White and Bob Saget, I feel like we need to protect him and his genius at all costs since he may be the last remaining national treasure.

Also speaking of LMM, my husband and I watched Into the Heights on HBO recently and being the major theater nerd that I am I really enjoyed it. It was uplifting and the cast was fantastic. It felt like Rent but with Latin vibes.

Aside from LMM things (still need to watch Tick Tick Boom), we’ve watched the Eternals on Disney Plus when it came out. And honestly, I think the movie was really underrated. So many people hated it or were disappointed and maybe because I feel like I have flat out finished Netflix and Hulu over the past two years but I really liked it. Was it my favorite Marvel movie? No, but honestly I think it opened up a lot of possibilities for everything.

Ok I am done geeking out now.

And on the I’m watching it on my own front I’m watching The Royal Treatment on Netflix. It is awful in the best possible way. If you are a fan of holiday rom coms, this one is for you even though it is not holiday at all.

I’ve been reading Battle Royal by Lucy Parker for like 2 weeks now.

Normally, I fly through books in a couple days, but I’m having a really hard time getting into this one but I’m determined to make myself finish it. The premise is cute: a former baking competition competitor with an affinity for whimsy and glitter finds herself working with the prim and proper baker judge that found himself on the wrong end of her exploding unicorn cake. Several years later, she’s judging the show alongside him, working across the street from him in a bake shoppe that rivals Willy Wonka’s and competing with prim and proper judge for a really high profile royal wedding cake contract. As their paths keep crossing, it’s obvious there is some romance baking between the two of them.

My two big kids have been loving making soup in the Instant Pot and help throw things in to make veggie or chicken soup.

I also have been making lots of roasted broccoli pasta lately because carbs beat all the winter blues right?

And I’m super excited to make lots of jalapeno popper dip to enjoy while not watching any football whatsoever.

Two things: the cozy slippers I bought myself this week because my feet were permafrozen and the huge tub o moisturizer my husband brought me from Target. It’s a huge jar of Cevae lotion that I will never finish and I’ve been using it two to three times a day to keep the winter dryness away.

That’s it from me this week! What are you up to? Leave me a comment below and let me know!